With thunderstorms looming, we attempted to depart St Louis and do a swing by of the Arch on our way - a nightmare unraveled itself due to extensive road works that prevented the SATNAV from finding us a place to access it, so I chose a side street, parked up, jumped out, took a photo, jumped in and we took off. 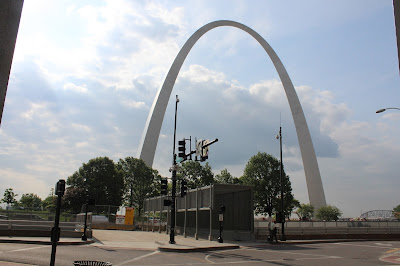 Needless to say, I was pleased to leave St Louis in my wake.

Our first stop was Mount Vernon Illinois where I was hoping to catch a break and see at least something pass through while we took a morning tea break. We stumbled upon the NRE Depot where locos are re-manufactured and behold, one of the UP heritage units was idling there, looking as though it was getting ready to depart.
While I was totally fizzing whilst taking photos, a blast from the diamonds could be heard, and a UP manifest with a CN loco on the point (or was that a CN manifest with additional UP power??) proceeded around the corner. The first video shot of the day and it's a ripper. The light was perfect and I got both locos in the one shot, and managed to take more stills at the same time. 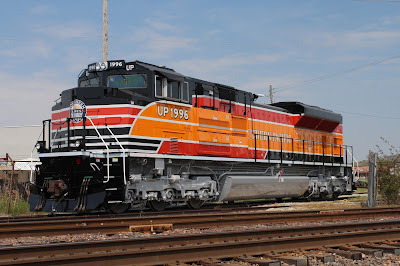 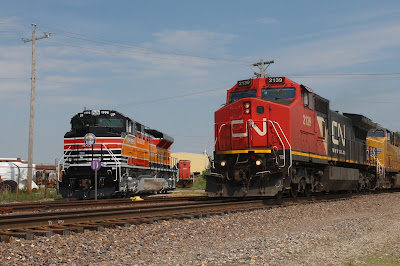 The next stop was Mount Vernon Indiana - good grief - two places with the same name, where have I heard that story before?
This place is the home of the EVWR - the Evansville Western Railway. I'm not one to on purposely find short line railroads, as they suck up too much time, but this one was easy so it was a no brainer. It was on the way to the next location anyway.

During this drive I taught Lloyd how to use my still camera, and he was like a kid in a candy store - lots of scenic shots which shows the extent of the flooding they had here recently.


Our next stop took us within spitting distance of our accommodation so we could spend the rest of the day exploring the area knowing that there wasn't far to go to get 'home'.
First off was the massive CSX Henderson bridge which crosses the Ohio river between Indiana and Kentucky. The drive there was really nice, lots of trees, flash ranch style houses and a smooth new road - only to have our path blocked by a coal train. Double back and use initiative to finally get there.
This bridge plus its approaches is over 3.6 km long, the span over the river is 1 km long as it is. Our first stop was to check out the Indiana side where the approaches are, and just as we got there, our coal train turns up - never have I managed to set up the video camera so quickly. Thankfully Lloyd had the mind to grab my still camera and loose off a couple of shots. Lucky. 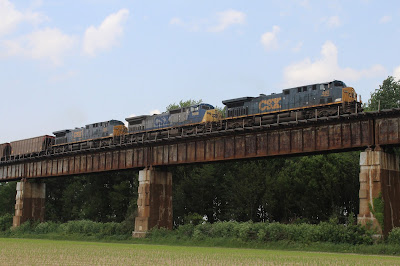 We then headed north up to Evansville IN where the CSX Howell yard is and I was in heaven - CSX trains up the gazoo. 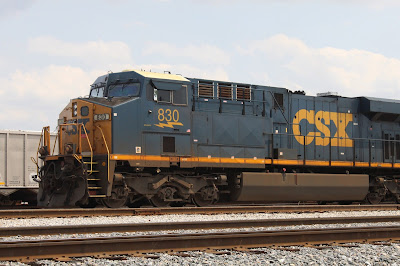 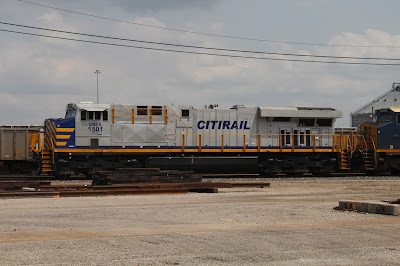 We then headed over to Henderson Kentucky and just missed a manifest crossing the bridge, however half an hour later another one kindly turned up. That's both sides of the bridge covered with both video and stills - brilliant. 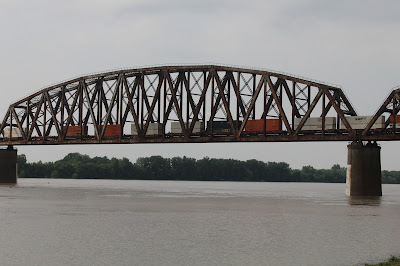 We then returned to Howell Yard to settle in for the afternoon and I managed to film the departure of an Intermodal, manifest and empty coal train - awesome. The lighting was sensational.

Lloyd took some more photos of bridges and things. 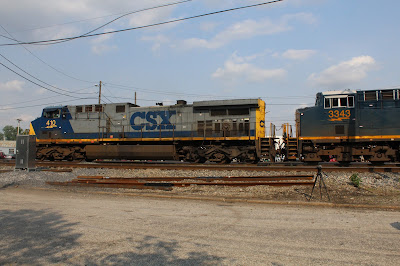 We also bumped into George Jackson, a railfan who's been lurking around Howell Yard for 31 years and he was an enormous wealth of information - we chatted to him for ages until it was time to find the hotel and check in. Today it is the Holiday Inn - it's good.

Today's weather was very warm but slightly overcast and a wee bit humid - a lot more bearable than it has been the last few days. Thunderstorms have been brewing but we haven't seen or heard anything yet. Fingers crossed.

Tomorrow we go to Indianapolis.
Posted by Erin at 18:22