Today we rose early, had breakfast and discovered the delight of a breakfast item called gravy. It looks like porridge, smells like - unknown, but is actually a white source with sausage pieces in it. It tastes like warm gravy - delightful - which means it's probably bad for you.

We hit the road and returned to the lift bridge where we caught one train passing through it.

All the time we were there we could hear the blast of horns on the other side of the Missouri river, so I made the call to relocate to Sugar Creek in the city of Independence. Good move.

Like a lot of tracks in and out of KC, they are shared by multiple railroads, and soon after our arrival, it was all on. In about 1.5 hours I filmed seven trains - UP, BNSF and Kansas City Southern. Mixed freights, intermodals and a two train meet which I caught on video.

Sitting further down the tracks were three more BNSF trains, engines running but unoccupied. As it turned out there was a shortage of crews for the weekend so the low priority freights were parked up for a couple of days. Criminal.


We waited a while after a lull in the action and nothing happend so I decided to go check out a few of the places I had earmarked - West Bottoms, Santa Fe Junction etc.  Thank goodness it was Sunday - the SATNAV had real trouble keeping up with all the required lane changes and sudden exits and turns on the highways and thankfully traffic was pretty light - and forgiving.

I got some mandatory photos of the old red brick buildings in the Bottoms and checked out an overhead view of Santa Fe Junction - which was blocked by trees. 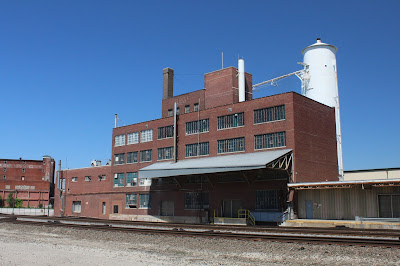 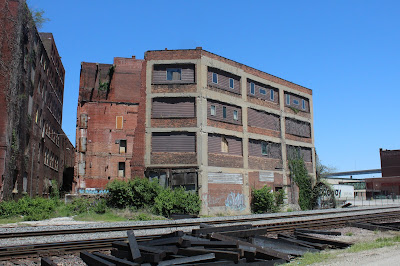 We drove forever looking for a K Mart, but ended up beside the KCS shops and Yard, which netted some bonus footage.

It turned out to be a long hot day which ended with a visit to a mega K Mart at Independence where we did some required shopping, followed by another visit to Sugar Creek to get shots from a different angle - four more trains.


We're both exhausted and got in at about 7:30 pm. Lloyd has already cut down about a dozen pine trees and is well on the way to clearing about 5 acres of forest. He's a tired wee man.

We'll probably head back to the Bottoms tomorrow to visit Doc's Caboose, but the main agenda is to go to Kansas City, Kansas.