Today I managed to once again draw out a 3.5 hour drive to over 6 hours on the road and achieve hardly a thing. It's Sunday, it's a long weekend and we didn't expect a lot on the rails, but we did OK - more through good luck than good planning.

The objective was to drive from Birmingham AL to Jackson Mississippi, with programmed photo stops at Tuscaloosa and Meridian.

Tuscaloosa has a cool wooden trestle that's still in use by the Kansas City Southern, but we were not fortunate enough to see anything ply the rails, but we did see a couple barges go through underneath on the Black Warrior River. While there we heard train sounds and hung around for a bit, just in case, but nothing turned up.


I then went to the diamonds where the NS and KCS meet and I just about popped a valve. I'd heard about these things before and had never seen one - this diamond set has raised flangeways on the KCS line. This means the NS has a complete unbroken rail whereas the KCS rolling stock has to ride up on their flanges on pieces of steel that lift them over the NS rails. Closer inspection revealed the damage this system is doing to the NS rails, and we could imagine the damage to the wheels. We weren't lucky enough to see anything go though - all was quiet on the Western Front. 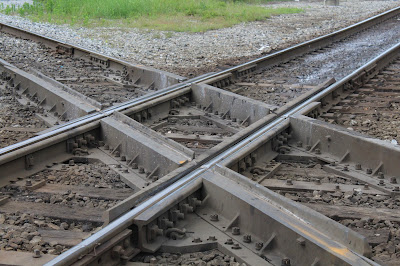 We then relocated to the Amtrak stop, and while I was taking photos of an SD40-2, we heard train noises coming off the bridge. We raced back to the diamonds and saw lights in the distance - which eventually disappeared - it was a switch job and wasn't heading our way.
That's enough - we hit the road again. 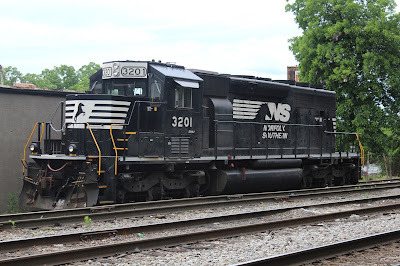 We arrived at Meridian just as Norfolk Southern and Union Pacific trains were about to meet - a quick assessment of our situation followed by a rapidly acted upon plan saw me find a place and set up the camera just in time. The UP ended up stopping so we were able to relocate and I was able to get the UP train a second time. 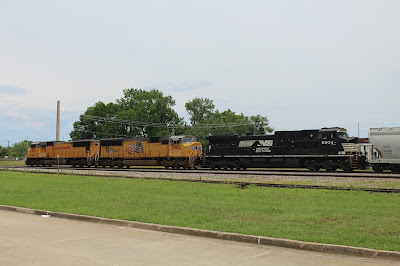 The drive from Tuscaloosa to Meridian took 90 minutes and we still had another 90 minute drive ahead of us, so we didn't hang around long and hit the road again, doing one final mad dash on the most excellent highway ever to our hotel at Jackson.
Upon departing, Sally must have felt sorry for us, because on the way to the highway, she took us past the Meridian and Bigbee Railway Yard that had their loco storage right beside the road - and no fences! The M&B is one of the many short lines that has been bought by the Genesee & Wyoming Railroad. The locos are in G&W livery but the logo on the side is definitely M&B. Very cool See the first photo above.

Check-in at the Hampton Inn & Suites was a breeze - all the lady needed was my name and she handed over the keys. Everywhere else we've stayed they've wanted car rego, make, model, a form of ID, an electronic swipe of a credit card and paperwork to sign to say I won't smoke or have pets in the room, a dna sample, a packet of chocolate biscuits, a letter of credit from your mother, a bottle of Jim Beam and a box of doughnuts....and that just lets you park your car there !!   Oh well, when you pay for a budget holiday, that's what you get. Oh, I forgot to mention the sunken bathroom floor and cockroaches at Charlotte...another story.

We reluctantly left our wonderful hotel room and went looking for trains. The light was low and shinning directly perpendicular to the track, so although the sides of the subject were lit up, both ends weren't - not the best but it'll do.

We saw a switch job returning home, an Amtrak head south and a NS intermodal heading east. Good job, but I wanted more, and I knew where to find it. 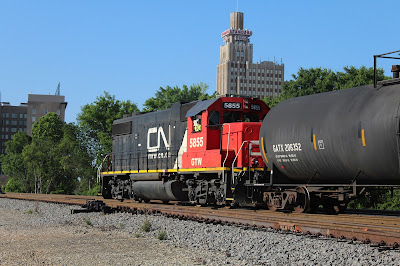 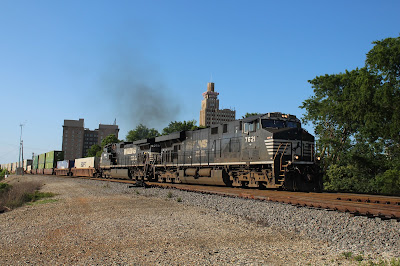 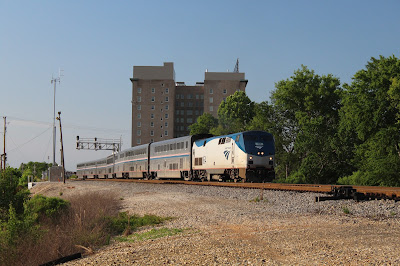 A quick drive found us on the KCS/NS line that heads west and a KCS coil train sitting idling just by a grade crossing.
A UP intermodal turned up and they reported a problem with a freight car on the KCS train which delayed it's departure. The conductor came over to us and gave us each a bottle of chilled water and hung around and chatted for a while - he didn't give us any good news about the area we were railfanning in, so as soon as the KCS coil train left, we high tailed it outa there.
Lloyd could have kept this guy occupied for hours asking about how they operate their trains and comparing their system to KiwiRail. Too dark for photos, but my video camera adjusted perfectly for the conditions.

A very stodgy meal for dinner and home just as it got dark.

Today was mostly fine and very warm. When we arrived at Jackson a large cloud was hanging over the city and surrounding areas and dropped a few spots, but once it moved on the temperature shot up and we hit 30 again.

This is where I bid farewell to Lloyd. Tomorrow he is being picked up by his son where he'll stay for another month, and I continue the journey alone.

I suppose I should say something about how Ronald Lloyd Cross has been a most excellent travelling companion and an absolute joy to be around every minute of the day, but if I did, the truth would eventually come out and I'd be branded a liar. Ha !
He is a well practiced practical kind of joker and has got me a couple of times with his attempts at humour for his own amusement - which usually involves the shower head and a stream of water going all over me and the bathroom floor.
He knows what bugs me and uses this information once again for his own amusement.

He is a powerhouse of knowledge when it comes to KiwiRail loco operations, and sadly, and to his utter dismay, I appeared to not give a penny. I was actually absorbing everything he said and have learned a lot. There, that should make him feel better.

Travelling alone will be a challenge as it's always good to have that extra set of eyes in an unfamiliar environment.

Tomorrow I continue west to Louisiana.

Ya'll come back now, ya hear?