This morning I woke to a heavy blanket of fog hanging over Shreveport. Surprised I woke at all - the Union Pacific did a mighty fine job of waking me up last night - a blasting air horn at 3:30 am was an especially nice touch - thanks.
Not wanting to tackle the idiots on the highway in this dodgy weather condition, I stayed at the hotel for about an hour or so waiting for it to burn off, and spending all my time on the top floor of the car park (there's only 2 levels !) looking down on the KCS and UP tracks below. I was not disappointed, with a few trains running through on both tracks almost one after the other. The noise of the screaming flanges on the tight curve was a bit over the top. 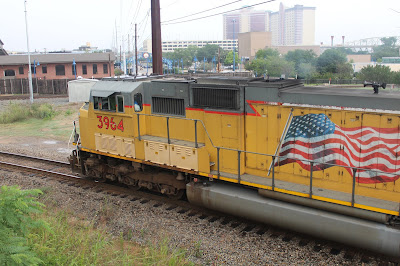 There was a bit of down time though, and my attention was soon taken by an inquisitive jumping spider that had the most amazing colours - camera switched to close up object mode and tried to get a photo. 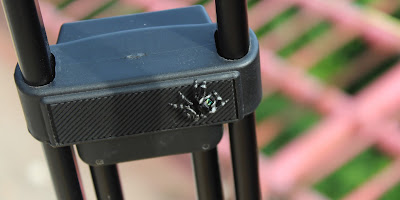 The four ginger kittens that kept me occupied last night were nowhere to be seen.

From the loco movements around here, it would appear that the KCS Shreveport yard has inherited a lot of the new (rebuilt) GP22ECO & GP32ECO engines - I've seen quite a few over the last day in their livery, looking un-weathered and shiny and new.


Anyway, time to move on, and the first port of call is Nacogdoches where there is a small yard, a couple of switchers and an interesting old style depot. A UP manifest came barreling through and I barely had enough time to set up the video camera - couldn't get any stills. The temperature had already shot up to 27 degrees so I sought out a bit of shade and found it in the form of the shadow of a highway overpass that had nicely manicured grass and was in a good area, and I could sit in the car and stare at empty tracks all day. I had a bit of a snooze and after watching the switchers at work and finally park up, I moved on. Now, speaking of nice grass, I've soon learned that you don't sit on American lawns - the ants may be small, but they pack a fair punch when they nip. 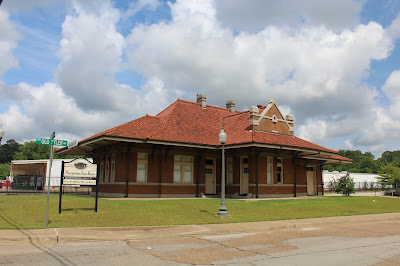 I had a quick look at Lufkin, Burke and Diboll - nothing to be seen. It may be relevant to note that when Lloyd and I spent our first night at Houston on arrival, the hotel was adjacent to the very same line I was following now (Lufkin Subdivision), and during that afternoon, we saw no trains at all, in fact nothing until the next morning when they all came racing through, so seeing nothing now should be no surprise I guess.

By the time I got down to Livingstone, I was thinking "At this rate, I'll be catching up to the train I saw this morning...holy crap, there it is !!" Although I put that phrase in quote marks, I didn't actually say it out loud, as this would imply that I talk to myself when train chasing......ahem, cough cough.

My next port of call was the diamond at Cleveland and it was rapidly coming up - I beat the train there by about 5 minutes, and still forgot to take any photos. I was keen on staying there to see if any BNSF stuff came through on the other track, however the heat was hot, the ground was hard and the air was fill of no sounds of trains (America - horse with no name), it was 3:30 pm and I still had a long drive to get to Houston...although you wouldn't think so looking at a map. Watching the rail car bogies bounce and twist as they went over the diamond was of some concern - one bounce in the wrong direction and she would be all over, rover. Some of those tank cars have got some highly flammable / toxic stuff in them - it would make for some great footage !!

I went to the effort to get a frame grab from the video clip.


I was in two minds whether or not to go straight to the hotel, or check out a model train shop in Spring, which was sort of on my way to the hotel, just a minor diversion.  Holy smoke, what a drive I had on I45 - lots of traffic, but most of it was behaving, and one of the ones that wasn't I found later on the side of the road being talked to by a cop - good job.

This is hilarious - I got to the shop at Spring, which from the outside looks huge, and it is. It's called Trains (brilliant concept idea with a lot of thought gone into that one) and it's run by a guy called Rice who sits at a computer behind an invisible desk, using MS Excel to process all his sales.
I walked in and I blurted out "Oh my God, are you packing up or something?"
You know those Hoarder programs on TV, well this is what you get when you cross that sort of person with a model train shop. Boxes and bins scattered everywhere, and the service counter has stacks and stacks of paperwork all around it (hence the invisible desk - it was buried), so that he is totally enclosed in - I really didn't figure out how he actually got out - I just assumed he slept there. He smelled nice though, so I guess he manages to bathe in there as well !
Well, Rice didn't like how I verbally mentioned the absolute shocking state of his business and tersely asked "Is there anything I can help you with?".
Asking for Athearn locos was not an appropriate answer for this guy - he wanted to know what scale, what colour scheme and what loco type - luckily I had an answer for him. He gave me a reply that I already knew the answer to (they're out of production), but I was hoping that by calling in, he may have had something lying around. But no. If I was looking for old Concor, Roundhouse and Blue Box Athearn kits, then he may have had what I wanted.
Near the front door of the shop sitting on top of various piles of magazines was a large cardboard box which had a lot of new stuff in it, and he said "Yes, you can look though that, it came in the other day" - I'm thinking, well how about putting this stuff on the shelves coozer!
I found some 53 foot containers (he closely inspected the product number of each package to ensure they were the same) and he gladly accepted my cash.
This was the most astounding place of business I've ever visited. It could be amazing, but it's a ramshackle collection of stuff scattered from you know where to breakfast.
Men that play with toy trains - nut jobs.

The next leg was to continue on the Houston motorway network and find the hotel. Thankfully Sally the silly SATNAV didn't let me down and I didn't take any wrong turns. The East Freeway must be old and hasn't been upgraded in the last 10 years.
It has a network of one-way streets either side of it so you can access the hotels etc. and once you click to how it all works, it's pretty easy to get around - you just have to watch for the idiots coming off the freeway from your left doing 65+ into your 45 mph zone.

I finally got in at about 5:30 pm and was knackered, but I was out of cash so had to go out again and go through another drive through ATM and get some more - too easy.

Dinner at a Mexican Restaurant (walking distance) and settling in for the night. Heavy clouds are building and Rice happily gave me a weather forecast, with the standard "If you don't like the weather in Houston, wait a minute!" line. Could be a thunderstorm on the cards. Speaking of which, a lot of places I drove through today had a lot of workers out trimming trees that had fallen, or in most cases, snapped clean in half. There were leaves and branches all over the road, with some of the houses also having tarps on their roofs, so it appears they've had a rough time of it here recently.

Very quiet in the car now, so during the long stretches when I don't need any info from the SATNAV, I turn the radio on. They've got both types of music - Country AND Western - yeah I know, old joke. Some of the radio DJs just love the sound of their own voices - thank goodness for the SCAN button.

The Hotelier is an Indian guy (from India) who asked me if I watched cricket (seeing my New Zealand ID) and I replied "Only when the black caps are winning - which is never!"  He thought that was marvelous! So he gave me an upstairs room that I had to lug my bags up to - sod.

Tomorrow I have a day to look around and find some clickety clacky things - thankfully the main junction I'm going to isn't very far away.