Today we relocated from Altoona PA to Cumberland Maryland. I had to make a difficult decision - take the long way via Johnstown and Meyersdale to Hyndman following the Sandpatch route, or shoot straight down to Hyndman before going to Cumberland.

The long way would see us trackside, the short way would get us to Cumberland earlier. One other factor was the fact that the expected high was to be 30 degrees C, and sitting in the SUV in that heat waiting for a train is not on the cards. The long way was windy and slow and not good for passengers, the short way was quick and easy.

I was indecisive right up to the last minute. I chose the short way as I wanted the time to explore Cumberland.

So, we went to Hyndman and arrived in time to see the tail end of an intermodal pass through town - as per usual...

We parked up at the bridge in time to see an Amtrak pass through, and then it went all quiet. 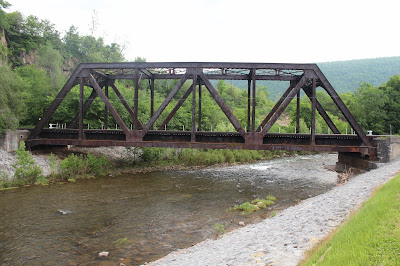 Knowing that Fairhope was just a few miles up the road, we went for a short jaunt and came across the grade crossing which also has a viewing platform elevated above the tracks, with a guide rope to help steady yourself as you climbed up the rocks - it was needed.

After a long wait a coal train finally showed up and soon after a manifest passed through, as well as a high rail. 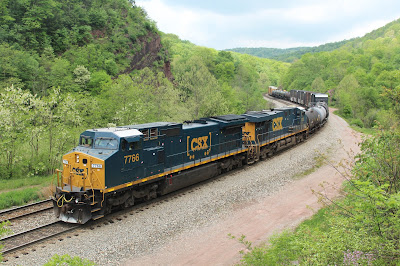 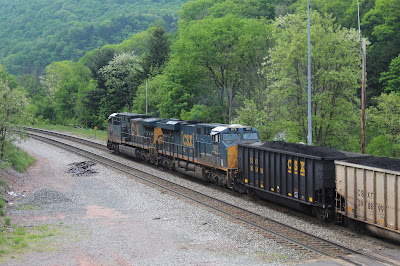 Two good shots were enough - off to Cumberland.

Cumberland is a massive CSX facility with heavy loco repairs as well as a large yard - about 4 miles long. Photographing this, let alone getting any video footage is near on impossible. On one side is the Potomac River, on the other side is a street that you can't stop on, and then there are the trees.

As it turned out, the best place to get photos of moving trains was from our hotel room, which has a good view of the action, however you can also hear the action so I'm not sure how well we'll sleep tonight. During the day, not many trains went through, however now that it's night, four have gone through since I started writing this - a few choice words have been bantered around the hotel room...make that five trains. Even though there's no grade crossings, the loco engineers have found a reason to hit the horn - right outside our window. I will find out who you are and where you live... 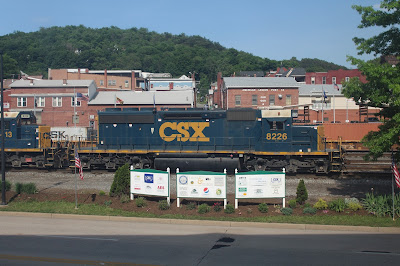 There were a couple of places where there were locos parked up, however finding somewhere to park became the next problem. 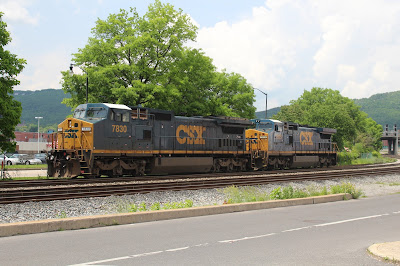 We tried the Amtrak station, which was in shade, however just a few yards away a large gathering of undesirables was happening - gut feeling said "Get out now" so we did. There was no seating at the station anyway.

Overall, Cumberland itself is not a railfan friendly town. You have to go to the outer limits to find a decent place to sit and wait - Mexican Farms Road was one of those places, although once again, the vegetation was getting out of control.

Dinner was at Roy Rogers, which would imply poor Trigger was on the menu (horse meat). We both had the chicken, but the crispy coating was so thick the flavours didn't penetrate to the meat, so it was actually pretty tasteless. Potato and gravy was good though.

Tomorrow is a big drive - the biggest so far...should be cooler though.