Wednesday 17 May (all times local)

Today we drove from Alliance Ohio, through Amish country (didn't see any) across the state line to Altoona Pennsylvania. There were a couple of stops along the way, but it was mostly a mad dash along I376 (to avoid paying tolls - how stink is that?) to get to Pittsburgh PA.

There was one major objective: to get a photo of the city from an elevated position - which turned out to be not so flash as we were facing the sun. I tried to get to the NS trench, but Sally took me somewhere else - I've yet to discover the reason for that - maybe something to do with out of date maps perhaps. 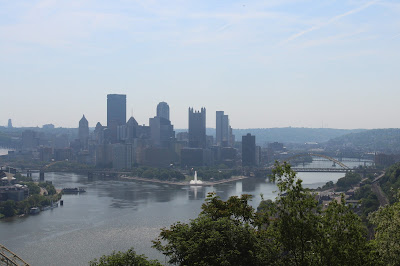 Driving in Pittsburgh is the pits - the streets are narrow, windy and steep and everyone (as per everywhere else) wants to do 100 mph wherever they go. It took well over an hour just to get out of it. Glad to leave that one behind.

The drive to Cassandra was a lot better - Highway US22 is in pretty good condition and there wasn't as much traffic. We first did a drive by of the coal loading dock, but no trains were present then went to the Cassandra Railroad Lookout - an old bridge that is now a footbridge which has an excellent view of the 3 Norfolk Southern lines. The position is perfect, the lighting was perfect - and all we saw were three helper movements go through in 4 hours - totally abysmal. Of course Sods Law kicked in with avengance and as soon as we departed, a train went through, and as soon as we got to Lilly, we saw another one following close behind on another track - grrrrr.
There were three friendly looking chaps sitting at the Cassandra Lookout and I rocked up and introduced myself and they were from Sweden doing a railfan trip themselves. Cool guys.


We swung by Horseshoe Curve just to take a look - it was 33 degrees C and cooling off in the hotel was considered more desirable than collapsing so we drove past the reservoirs and found our hotel - Microtel - it's not bad. The rooms are poorly configured (fridge beside my bed), but it's got that new smell about it and all the fittings are intact.

I couldn't sleep but Lloyd was gone as soon as his feet were off the floor. A couple of hours later when it had cooled down to 31C, we went for a drive and I attempted to navigate the Altoona one way system - we saw the same bridge 3 times.

I found the dead end road that goes beside the Juniata Shops turntable and you should have seen Lloyds eyes light up - locos everywhere, and an old EMD unit was being load tested and puffing out a lot of smoke - it was sick. 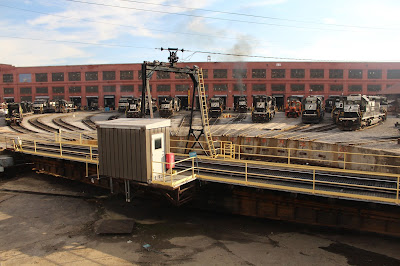 We then took a cruise along Chestnut Ave and saw the contents of the yard - locos everywhere. I did a brief stop to get a shot of the rebuilt ex Union Pacific SD9043MAC locos that are now called SD70ACu by Norfolk Southern - many of them were in various states of repair. 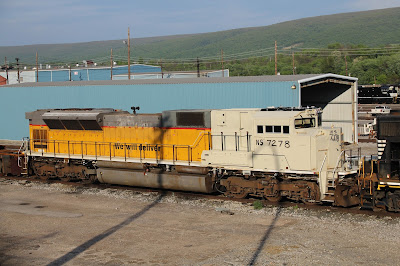 We swung by the museum and decided that we'd give it a miss tomorrow - but stumbled across a guy who was shooting video from the dark side of the tracks - good luck to him.

I tried to find a particular foot bridge but kept taking the wrong off ramp, or wrong lane, and I was starting to get hangry.

I suggested we try SHEETZ for the first time for dinner. We'd seen this gas station several times during our trip but had never called in. Today I popped in to use their loo and was stunned at what food was on offer - think Subway then add touch screen ordering booths, free massive drinks, hot dogs, salads, alcohol - everything. It was yum, and like all fast food places here - exceptionally cheap.

We stay in Altoona 2 nights so tomorrow we go exploring - first up will be Horseshoe Curve I guess. There are only so many hours of daylight and there are tons of places to go filming here - we'll be lucky to see more than three or four.

The Alleghenies are just stunning - miles and miles of trees - everywhere.