After last nights heavy rain and thunder, we woke to breaking cloud and a mild breeze and slightly chilly which soon turned into solid cloud and a bit cool, but as the day progressed, the cloud broke up and it got pretty warm, especially when the sun pushed through.

I had a plan of attack today that involved doing a complete circuit of Charlotte and its surrounds that would encompass both CSX and the Norfolk Southern railroads.

Most of these locations were unknowns - Google Street View helps you find good locations, but it doesn't tell you what sort of area you are in safety wise and if there are any noise factors that would ruin a video soundtrack - traffic, industries, a whoopie cushion factory etc.  A couple of the places turned out to be no good, but we found a couple that were good to satisfactory.

First up is Old Dowd Road - this road has been realigned, so Sally the Psycho SATNAV had problems negotiating it - wanting me to drive over median barriers, through paddocks, airport fences etc. Not a good look.

Common sense prevailed and I found the location I was looking for - on the threshold of one of the runways at Charlotte International, on an old disused road that looks down onto the access tracks into the Norfolk Southern Intermodal Yard - that's located between the two runways at the airport. It seemed like a good idea at the time, however I couldn't see the NS main line, so we moved on.

We ended up at Mount Holly, where we caught the CSX doing some switching at multiple industries using a GP40/Slug combo. For those of you reading this and not caring about the trains, either skip the next paragraph or for some enlightenment, read on:

To save on fuel, railroads use older locos like GP38s, GP40s etc and rip out their prime mover - the big diesel engine. They also take out all the associated bits like alternators, radiators and the fans etc. that aren't needed, and install blanking plates where these bits were, and add ballast to bring the weight up to ensure the wheels don't slip. Electrical power to this loco to drive the traction motors is supplied by a GP40-2 that is semi-permanently connected to this loco and has a big as electrical cable connecting the two. This gives you just as much traction as two locos for half as much diesel. They are only ever used for doing local switch jobs to industries etc. and you won't see them in use hauling big trains out on the main line. As you would expect, these locos are pretty quiet.


On with it then. The switch job was eating into our time and I'd taken enough photos and got plenty of footage so we moved on, ending up at the CSX Pinoca Yard. Google Street view says that Brookway Drive goes right up to the CSX office, however CSX have claimed all of Brookway Drive - as I was to find out later...

On the side of the road in obvious CSX territory is a lovely sign - as per below, which is where we watched the arrival of a freight but realised that this place was more suited to afternoon shots, so moved on and decided to come back later.

From here I was starting to take notice of some of the cloud formations...nothing happened....yet. 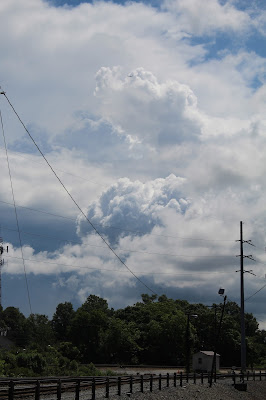 We moved on and found that once again, the map data on the SATNAV didn't quite match what I was driving on, and she was slipping back into the habit of telling me to turn either way too early or too late, just as we drive past the road we were supposed to go on. The word 'Recalculating" is now a dirty word in our car.

We got lunch, got hounded by people (undesirables) claiming to be Vets begging for money, gassed up and moved on to the Amtrak Station. This is the first station we've come across where the platforms are locked off from the public until the train turns up - and for good reason. The platform is between two tracks that are the main lines through the Norfolk Southern Yard. Not a safe place to be.
We missed one train but saw two more - the city skyline was a pretty good backdrop. 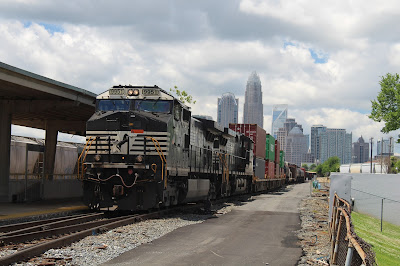 We moved on to a Norfolk Southern grade crossing, and although the location was pretty good, we only saw two short switch jobs for the long time we were there...and it was starting to get hot. 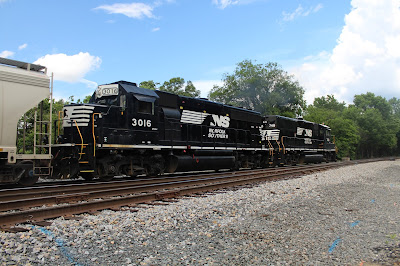 Our hotel wasn't too far away so we returned briefly to freshen up and then went back to Pinoca Yard - and discovered the primary reason why Americans probably don't like trains. We got stuck at a grade crossing for near on 20 minutes - probably more. As more and more people got impatient and turned around, we got closer and closer to the crossing and had a good view of the action - even managed to get the odd photo. It had also started to rain so I was in no rush to get to the other side.
Finally the sun came out and it was my turn to either wait or turn right - I chose to turn right and got to the yard just as the train was starting to move back in.


Filmed and photographed a couple of trains and found out by a friendly but serious CSX employee that we were actually trespassing - he was happy when I told him we would leave as soon as this annoying intermodal finally left - which it never did.  Another employee didn't give a toss that we were there and only wanted to know if I was photographing for a magazine. Happy guy, very care free.

I gave up due to impatience and poor light. Dinner at Waffle House (full as a bull) and home.

All in all, an OK day with about 10 shots taken on video. Lots of photos though.