Today we drove from Marietta GA to Birmingham Alabama, with photo stops at Bremen GA and Anniston AL.

We used I20 to get to Bremen, and then realised that in quite a few places, the tracks would come close to Hwy 78 so followed that instead of putting up with the crazy 70 mph traffic on I20. Good idea.

Nothing happened at Bremen, and a lot of the tracks there had freight cars parked up. We continued west and came across the town of Waco which had a feed distributor which had 5 empty tracks and an old switcher parked up. I took some photos and locked this location in the back of my head in case of trouble.

We continued on and found trouble - a Union Pacific (this is supposed to be Norfolk Southern tracks!!) intermodal with a whole lot of EMP domestic containers came rolling our way. A quick U turn, and back to Waco where I got the shot and photos. 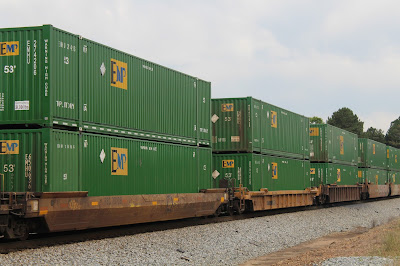 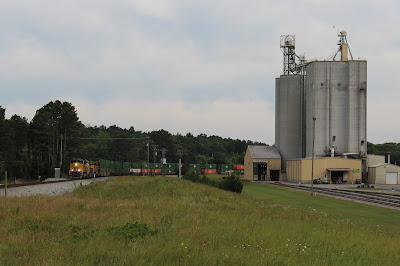 Just along from Waco near Tallapoosa we stumbled across the Helton Howland Veterans Memorial Park - another 2 days and I guess this place would be busy, but today it was empty. On display were various military hardware items including a Huey and a couple of F105 Thunderchief aircraft...and some Army stuff with wheels and guns on them that Lloyd was fizzing over. Something about 'self propelled' and 'Howitzer' was bandied around - I wasn't listening. There's also an amphitheater, a lake for fishing and lots of picnic tables and the local Courthouse...I bet that threw you.

We continued on and as we passed under the tracks at Edwardsville, we both saw an NS loco sitting at a signal light. Another quick U turn and back a mile to find a grade crossing. We'd seen an Amtrak train earlier and made a quick assessment of the situation: the NS train was too long to fit in the passing loop so was holding on the main. The Amtrak then turned up and sat in the loop. The NS intermodal then used the main to cross with the Amtrak - simple. The NS train was horrendously long. 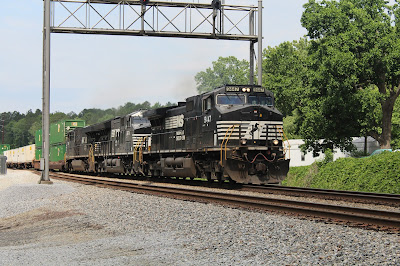 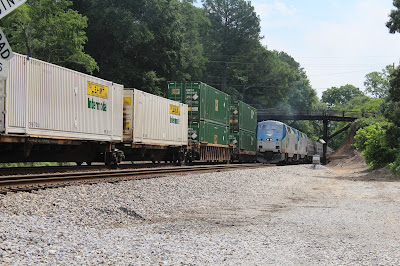 We continued on and saw nothing new until we finally got to Anniston, where we got talking to a girl called Jennifer...and saw a bit of NS action - two trains in fact - the same Amtrak was parked up at the station but by the time the NS autorack train passed through, this had gone. Never mind. 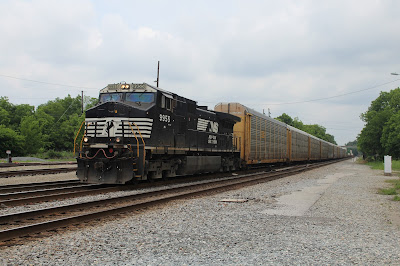 Once we got to Pell City, Sally the Pschodrama SATNAV, in her attempt to avoid highways was sending us on some crazy diversions, so I relented and got her to get me to Irondale by the quickest route possible. Irondale has a really good covered raised platform and tables and benches set right beside the NS main line - I mean this is so close you could just about lean out and touch the trains. The down side is that it's on the wrong side of the tracks for photography and it's at the end of the NS yard so trains entering and leaving are going really slow. By now the temperature had climbed to 29 degrees (it got to 30) and it felt a bit sticky humid, even though it wasn't - figure that out.

No sooner had we arrived than a NS manifest that was waiting to get into the yard was released and rolled by. There was a bit of a wait then an Amtrak flew through, then a NS manifest came out and stopped, followed by a switch job of what appeared to be recently repaired freight cars, that was being managed by a KCS loco. None of the freight cars; air hoses were connect so it was an easy guess that this was just a juggling maneuver. 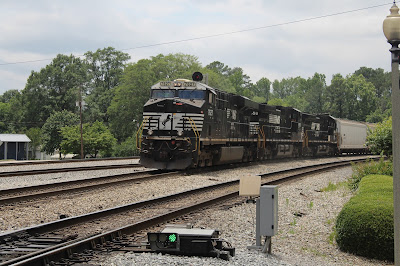 For some reason the NS manifest reversed back into the yard and the KCS disappeared around the corner, so we high tailed it across the grade crossing while we still could and found home, checked in (busy busy busy) and went in search of more places before it got dark. 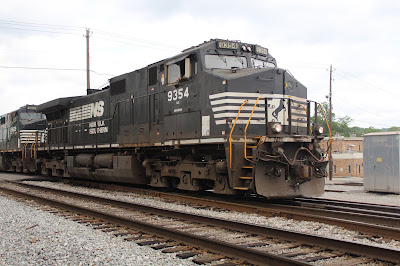 I surprised Lloyd by taking him to a BNSF Yard, but nothing happened and time was pressing, so I then went over to the CSX Yard and sat on the main line until nothing happened - in fact it started getting dark so it was time to go. Nothing seen on both account so drowned our sorrows at a place called Milos - probably the most Kiwi like burger joint you could ever come across - even the fries were just like the McKain wriggly fries - brilliant - shame about the 20 minute wait though.

Back home and catch some zzzzzs. Well Lloyd is already out to it and I'm still up composing this for all of about 5 people. The efforts I go to.

I've never been called "Baby" so many times in so few days - I'm thinking it's either a Waffle House thing or is just the way they talk down here in the southern states.

When I get home, ask me about the word 'thataway'.

Tomorrow we continue west and cross another State line.   The end is suddenly coming into view.