Today was an easy day with not a lot to do. I had a couple of railfan spots lined up and only one proved fruitful - more of that later.

We both had a bit of a sleep in but got up in time for breakfast. We then purchased coinage and powder from the front desk.....good grief, this is getting boring already. What I mean to write is 'we did our laundry and waited for the weather to warm up."

Just before midday we went into the city and Lloyd went crazy with the camera as I drove around - cool statue/fountain in the city centre. 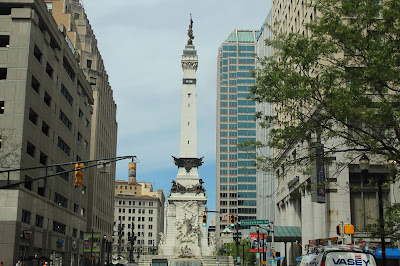 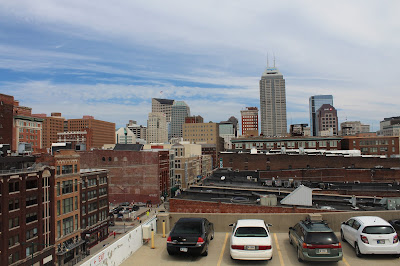 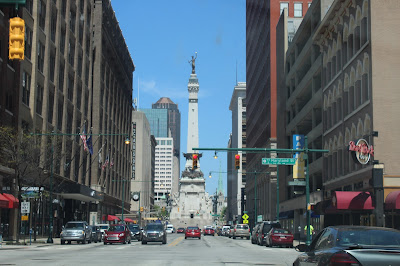 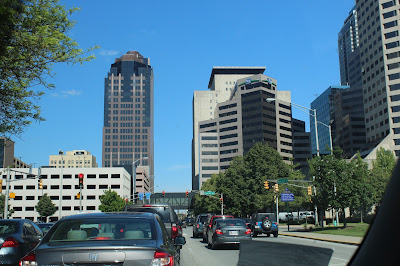 I finally managed to find the entrance to the Amtrak carpark building and there we sat at the top viewing the skyline in the cool wind waiting for trains to appear down below.

I managed to video two - a KCS and CSX. Lloyd snapped away on the camera while I hung onto the video tripod - it was a bit windy. That's the short version. What actually happened was we sat there for about 30 minutes before I heard a tell-tale rumbling emanating from the tunnel in the station building, and a KCS intermodal appeared and cruised past. 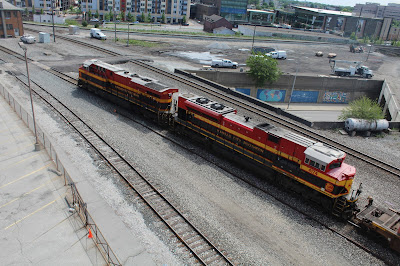 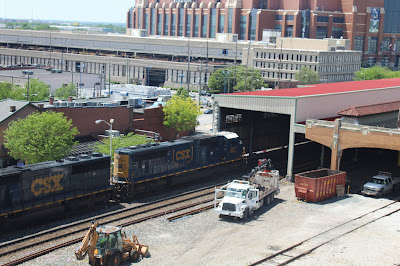 After what seemed an eternity (it was really cold and windy) I finally decided to go to the pay machine and pay for our car parking, and just as I got back to the car and started packing up, we could hear train horns approaching - darn it, what to do? I've paid for my car parking and another train turns up. On top of that, some likely lads turned up and they appeared to be ready for mischief. Luckily it was a relatively short CSX manifest which meant we could vacate the area before anything untoward happened.

From there we had lunch in a dodgy part of town - the first time I've had KFC since June last year. I was expecting the worst - but I'm still upright so that's a bonus. This particular KFC only sold Zinger (pronounced zing-ger in Indy) burgers - no original recipe - odd. Stay away from Shelton Heights.

The next spotting place was only 5 blocks away and I wasn't entirely happy about the surroundings. The signal lights were off and there was no chatter on the scanner, so we took a long drive through the suburbs to Avon Yard. The place I had lined up was a grade crossing that is now being converted to a bridge, so the entire street was closed. Scratch that one. We kept heading west until a suitable grade crossing could be found. And there we sat and waited for nothing to happen - which it did for the rest of the day, so depending on what your goals were, we either had a brilliant afternoon or a sad hopeless one.

We then relocated to tracks on the other side of the city closer to our hotel (La Quinta !!) and still nothing to see, with dark signals all round.

Dinner at Denny's and home.

I didn't have much hope for rail activity at Indy and it didn't disappoint!   Two video shots for an entire day's effort.  The Indy 500 is on tomorrow so I totally avoided that part of town.

Tomorrow we relocate to Fort Wayne Indiana which is north of Indy. It's only a 2 hour drive so we'll be taking a detour via Muncie and a few smaller towns to see what we can see.