Nothing succeeds like a budgie, or so it is said.

Today we explored the thriving metropolis of Fredericksburg Virginia. To tell the truth, it looks just like any other place here, so I didn't waste any time acting like a tourist and headed straight for the Spotsylvania VRE Station - VRE = Virginia Railway Express, which doesn't run on Sundays so I was guaranteed a good car park and an empty platform.

For us railfans, Spotsylvania was known as Olive...probably still is for the die hards.

Anyway, with memories of 2003 lurking in my mind, where I stayed all day on this line and only got about 7 shots, we arrived to an empty car park and an empty platform and reasonable lighting conditions - a bit too bright with the overcast conditions, but you can't have it all.

As soon as Lloyd managed to shut his mouth for a second and stop talking, it was soon obvious that we had just missed a train - diesel and horn sounds coming from the south fading into the distance. Never mind, there's surely to be something come along - and so it did. We got there at about 0930 and by the time we left at 1300, I'd filmed 9 trains. Most were Amtrak but hitting the RECORD button on the camera counts, so nine trains is nine trains. 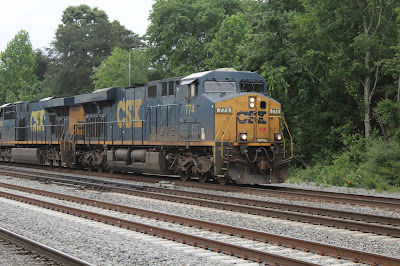 Spotsylvania appears to be a very new subdivision still under construction, with house and land packages with waterfront access, boat ramp etc starting in the mid US$200k mark. Insanely cheap house prices - these people would have a heart attack if they moved to NZ. 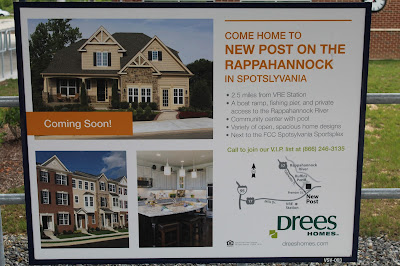 We partook in lots of interesting conversations and came to some inspired conclusions about what was going on during the down time, but no ground breaking insights worth publishing. One assumption was that the lines through here were a double track main and the far side track was either a passing loop or an additional main that ended nearby and the near side track was the line for the platform, making a total of four tracks. Interesting stuff, isn't it? Never mind, anyway, one of the tracks had new concrete sleepers in it and they were all crooked - somewhere out there is a guy who had just one job...one job.


Over the hills and far away was the Fredericksburg Gun and Rifle Club, however the sounds coming from it and the echos from the clouds made it sound like the Cannon and Howitzer Club.

Tummies needed to be fed - yes, another trip to Sheetz, then we ventured into the city to have a look at people fishing in the Rappahannock river. I asked one lady what she was fishing for - she said, and I quote "Nothing, I just like the romanticism of fishing", at which point she flicked me a quick wink and a wry smile.
Okaaaaaaay.
I took a photo of the rail bridge and told Lloyd that there were too many people here and the light was bad for video... 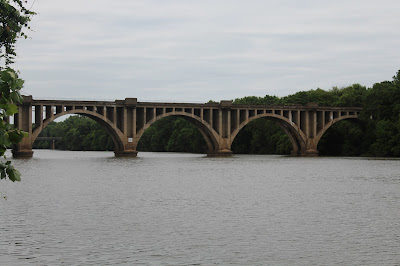 We then popped along the road a bit and parked in the Amtrak/VRE station car park - once again empty - and I scoped out the platform for potential shots, which also looks along the bridge I'd just photographed. It was bang on, so I popped back down to the car and grabbed my gear and set up.

Then an undesirable turned up and sat about 30 metres from me and he was frantically gesticulating and talking to himself, (I think he was in the middle of an argument with one of his personalities and was losing) then he walked towards me and started nosing through the rubbish bins - getting closer and closer. Time to go. Sods law promptly kicked in and a train turned up as we drove off. My personal safety and that of my gear was more important than getting a shot.

Using all this knowledge and skill, I decided to check out the VRE station at Leeland. It's OK, but there are lots of lamp posts in the way. However the close proximity of the trees kept the bright overcast sky out of the shot and the access path was elevated above the tracks so that was a bonus.


By the time we left at 1730 I had another eight shots on the memory card, plus a video of a cardinal singing his lungs out to another cardinal; awesome little red birds that look strikingly familiar to the big red birds in the game Angry Birds. They have a crown of feathers and a black face that makes them look annoyed at something. Yes, I videoed a bird.

Dinner at Popeyes - more tasteless chicken similar to Roy Rogers and 'home' - two beds and a shower, that's what we remind ourselves of.

A nice 21 degrees today, so I got careless and ended up with a red head and face. We both had a good day with lots of war stories told and a reasonable number of trains in comfortable and safe surroundings.

Tomorrow we head south, but not very far.