No matter which way you looked at it, today was going to be a big day on the road, and it was, but much bigger than anticipated. Luckily we awoke to a cloudless sky, which continued all day, so no rain to contend with.

I opted for the long way, which had three natural legs to it. The first leg took us to Columbia South Carolina via Hwy 77 which was in really good shape and our average speed was 73 mph most of the way - the speed limit is 70. Here we visited Cayce Yard and saw a GP38-2 doing some switching. The light was all wrong, so video was not on the cards.  Photos were crap too.

The next leg took us to Augusta Georgia via Hwy 20 which was an abysmal mess - you'd never even know if you got a flat tyre as the road noise was way up there. Here we visited the CSX Augusta Yard on Arthern Road. Two AC units were being re-positioned (one being a CitiRail) and I had just enough time to shoot off some stills before disappearing. 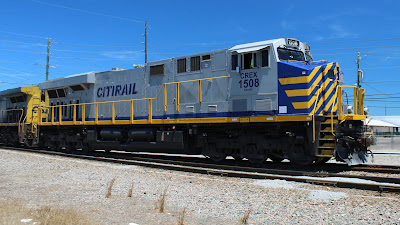 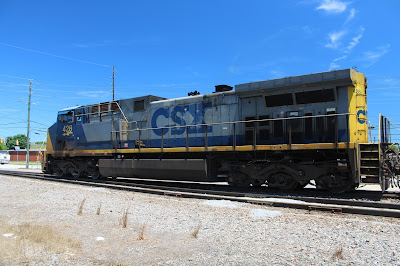 The last leg took us all the way to Marietta via Hwy 20 which was in good nick again. Absolutely no scenery - all you could see was trees.


This leg was a nasty 168 miles which should have taken about 2.5 hours. It took us about 4.5 hours. We hit traffic way south of Atlanta and we were varying from 50 to 20 mph on a 70 mph highway. I took a wrong turn, which turned out for the better as the rest of the highway was at a standstill, so ended up taking city streets all the way up to Marietta. It was slow going. Apparently it's like that on a Friday, and today is the start of Memorial Weekend, so that didn't help either.

We checked in, had dinner and decided to try and get at least one shot on video. I checked out a couple of places that were unsuitable but found an idea spot on Tower Street that I thought would be OK. The locals were friendly - being doped up does that to you ("You from Kentucky??) - and they advised that trains came through about every 15 minutes.  Yeah right...

The sun was setting fast, the mozzies were getting active and I was getting a bit worried about not getting anything on video today - then it happened - the blast of an airhorn behind us and a triple header CSX manifest came thundering through, obviously struggling with the massive load it was hauling. Lloyd was too busy grinning to bother counting the freight cars. 10 minutes later we heard another horn from in front and an intermodal did its thing soon after. Lloyd missed counting that one as well. He has one job to do and has successfully failed at it every time a train turns up.

Two trains in 30 minutes - by golly, the old stoned geezer was right !

By now the sun had gone down and the bitey things were driving me wild, so we found our way home to settle in.

Now, I was tempted to swing by the yards at Atlanta and take a look. However the overwhelming traffic problem soon convinced me to flag that idea. It was taking us an average of 15 minutes just to progress from one block to another. It was really insane.

Tomorrow we cross another State line as we continue our journey west.

PS - forgot to mention yesterday I saw a Coyote eating road kill near Charlotte - not bothered by the traffic at all.