Monday 15 May (all times local)

This morning while we were packing up our gear in preparation for departure, I noticed a folded piece of paper with two post cards attached to it - not a real surprise, considering I was in a hotel room, but it was in front of the TV and looked out of place. I opened it up and it was a personal note to me from the hotel manager, Mr Patel, acknowledging that I was a railfan and wished to welcome me to Fostoria and included a gift of two postcards. He also said that he had a lot of train DVDs to gift to customers and for me to go and see him.

As it turned out, he had dozens of different train DVDs made by a local enthusiast and we were allowed to help ourselves - and so we did.

Needless to say, I can't say enough about Mr Patel and his excellent customer service at the Best Western in Fostoria - highly recommended.

The drive to Marion was to take only an hour, and I had planned to get additional footage at the Railfan Park first thing in the morning, however the light was all wrong and two guys were mowing lawns and making a noise so we headed off - I got heaps of footage the previous day anyway.

No sooner had we left Fostoria, we saw a Norfolk Southern autorack train sitting at the outer edge of the yard and luckily there was a road with a grade crossing just beyond, so we diverged a tad to check it out. After about 10 minutes it departed - and it was a fine shot with good light. 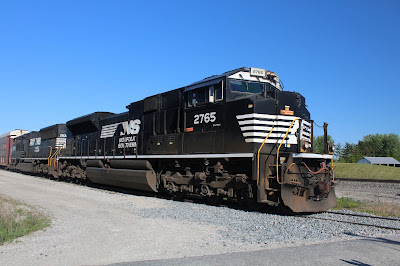 Based on a casual discussion with other railfans the day before, I decided to continue Northeast and check out Bellevue Ohio. Bellevue is only a 23 minute drive to Lake Eire - I didn't realise we were so close otherwise I would have taken a look - lost opportunity, never mind.
It was an easy 40 minute drive and I soon found the Railroad Museum - that was closed. 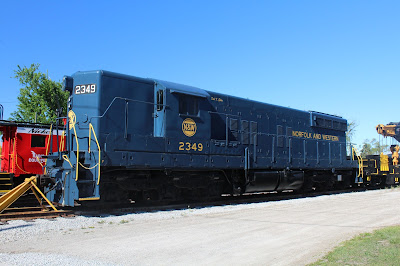 The main line tracks through town are in the form of a triangle, so we re-located to what appeared to be a good viewing spot - which turned out to be an excellent viewing spot. There is also a covered shelter and a picnic table there for railfans.


From Bellevue I shot about 10 Norfolk Southern and 1 Union Pacific train - it's a busy place. At lunch time we did a quick shopping trip and purchased the necessary goodies for making our own lunch, returned to the covered shelter, hogged the entire table for ourselves and tucked in - while all this time trains continued to roll by. Happy as a pig in mud ! 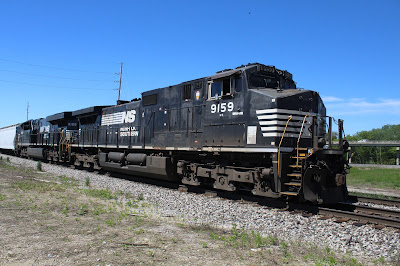 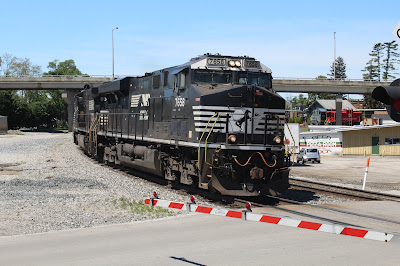 I had to drag ourselves away and drive to Marion, as this place has been described as the "Train watching capital of Ohio" - hardly.

Beside AC Tower Museum (also closed) are two sets of double lines (one CSX, the other Norfolk Southern) that are bisected by another set of two lines (CSX) - this makes for a very noisy place when trains are banging through. We checked in and rapidly departed for the diamonds. A tamper was just finishing up work when the same UP freight we saw at Bellevue came rattling through. We beat it by over 2 hours - criminal. I filmed a couple more movements and that was it. Dead quiet.

I do have to make mention of the (apparently) father and son team who hold the access key to AC Tower that's part of the museum. Our attempts to strike up a conversation with them were met with grunts, snorts and comments of disatisfaction of being interupted. Needless to say, they didn't invite us in to have a look at the old signalling equipment - their people skills are on par with a half dead cabbage.

We took a cruise around the outskirts of the CSX yard and only found the UTLX Tank Car Company - no photos worth taking - just lots of broken tank cars and buildings.

Dinner at a Steak House beside our decrepit hotel where only half the wall outlets work - so Lloyd and I are fighting over wall sockets to charge camera batteries, operate laptops and hair straighteners - I'll let you guess which one is mine and which is Lloyds...Ha ! He'll kill me when he reads this !

Marion turned out to be a bit of a dud, and I'm very glad we acted on good advice and took the detour to Bellevue and spent most of the day there first.

Ohio is gorgeous country. It's mostly flat and very green, and not that horrible dark native green we have at home, this stuff is bright as, and the farmers grow three crops: corn, wheat and soy. They rotate the crops in their paddocks each year. It looks like all the farms have patches of forest on them and we're wondering if it was some sort of requirement to encourage wildlife to live long and prosper....whatever. Lots of dead deer, gophers, raccoons and the odd squirrels on the roads.

Apparently today we saw a very unique and rare sight - one of the trains I videoed had a very odd looking vertically mounted cylindrical device on it that was mounted on a flat car that I think had extra wheels - due to the weight of the item. A local railfan said that the item was in fact used to transport radioactive waste and they are usually escorted with armed guards on the train - so this item must have been empty.

Tomorrow is a long drive east to Alliance Ohio. The trees are getting closer...

Weather is getting warmer every day and it appears tomorrow is to be a scorcher - thank goodness I've got Lloyd here to hold a sun shade over me while I sip my iced tea ....