What a day. We kicked things off with a visit to Horseshoe Curve, but got there too early, but as we sat at the gates contemplating what to do next, Norfolk Southern loco AC44C6M number 4002 went through leading a stack train.

This has been the first time that Lloyd has seen me anything above mildly excited about seeing a NS loco - and for good reason - the paint job is one of a few. Taking a photo of this loco was impossible as the tracks are way up high, and we were way down below, and I just had to get a video shot of it - the next best place to get a shot was at Cresson, I made like an American and chose to ignore the speed limit and high tailed it through the hills and far away. We got there with about 2 minutes to spare. Check it out.

We then returned to Horseshoe Curve, which by now was open, paid the admittance fee and caught the funicular railway to the top where the viewing area is. Later that morning I needed to get back down to the bottom in a hurry so I took the stairs both down, then up. I passed a few people on the way up - OK, so they were toddlers.

We spent the rest of the morning there and I managed to film a reasonable number of trains, including one Amtrak and a couple of helpers - I haven't checked the video footage yet so don't know for sure. It got to about 29 degrees again but we were sitting in the shade of a tree and a cool zephyr was playing around so it was easily bearable.

As anyone who has visited 'The Curve' can attest to, it's impossible to get an idea of the scale of this place until you actually get here, go to the top and put your back to the tracks and see the height difference from one side to the other - it's amazing. Recently a lot of the greenery was removed from key areas of the track so visitors could see more of the trains as they came around - the efforts by whoever did this are appreciated. 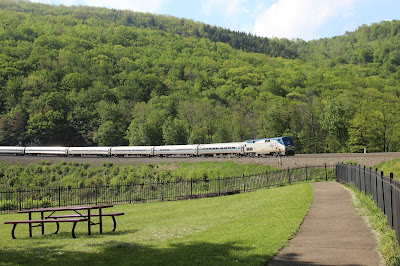 We popped back to Altoona for lunch at Sheetz then went to Tunnel Hill/Gallitzin. Since there was no shade there, my intent was to photograph the tunnels and a few things then move on. No sooner had I got out of the car I realised there was a train about to exit the tunnel - no time to set up the video darn it, so only took stills. Just as the tail end popped out, another train came around the corner and entered the tunnel. It's all about timing.


I did consider checking out Bennington Curve, however the heat and with the potential encounter with rattlesnakes ("I don't do snakes - no way, not going there" = Lloyd), I decided, probably wisely, to give it a miss.

Before anything else happened, we carried on to Cassandra where the Railfan Lookout is and sat there for the rest of the day in the cool shade of all the trees, on benches provided by the local hotelier, who encourages railfans to the area by giving them a discount if they stay at his hotel.

Lots more trains with the scanner bursting into life about every 25 minutes. We also bumped into two guys who were also at Horseshoe Curve that morning and we chatted to them all day long.


Soon enough 5 pm rolled around and the cloud was building up which was reducing the light level - we were also getting hungry and tired - yep, back to Sheetz again for another cheap meal. A quick cash top-up at a drive through ATM and we were soon back 'home'.

Total video shots today - wait for it: 18, which doesn't include the helpers. A good busy day that was thoroughly enjoyed. Stack trains, intermodals, manifests, passenger and even the smelly trash trains all went through, with most of them being shoved up the hill with the use of helper locos on the rear.

Tomorrow we start heading south and cross over to the State of Maryland.....and more trees I guess.

A brilliant day with not much driving.