This morning I woke earlier than intended - probably something to do with the traffic noise on the East Freeway. Did a bit of this and that and then the door to my room came crashing open. The cleaner wanted to know if I wanted the bed made and towels replaced - jeepers - it's only 8 in the morning !   I should still be sound asleep. Thank goodness I wasn't up to no good - she entered with no warning at all.

Had the usual hotel breakfast (waffle) and planned the day ahead. I needed a haircut real bad so when I came across a Barber, I promised I'd call in. Once again it was foggy, so no rush to get going. I saw three fender benders on the road today - one right in front of me - usual case, the guy in front of me didn't see the line of red brake lights in front of him - wham! Texting isn't illegal in some States - what I've seen on the road so far would make a Kiwi Cop cringe.

The plan was to find two hobby shops - Pappa Ben's and G&G.   Just across the street from Pappa Ben's was a Barber, and he did the most excellent job, including the use of a cut-throat razor to clean up my neck and a massage machine that was divine on my shoulder.

Pappa Ben's is a dedicated model train shop and if I was an N scaler, I'd be in heaven. Alas it was the same old story - if you haven't back ordered it, then we ain't got it in stock. I found some more 53' containers that would look pretty and a CSX box car - I didn't need it but it was cheap and made by Intermountain. Those in the know will understand.
The poor guy behind the counter was doing his best to be nice to two non-paying loud talking customers from New England (more like New Joisey) and they just wouldn't stop their discussion and let me pay for the stuff I wanted. One of the guys made me look like a super model and he had to walk sideways to get through the door. As soon as I looked at the door the owner interrupted them and happily took my money.

G&G was a lot friendlier atmosphere, and no stock once again. I got a few more 53' containers that made the pretty one's look even more prettier. Finally found some UMAX containers. I was looking for a particular loco in a particular colour scheme.

In my disgust, when I got back to the hotel room, I logged onto ebay, found what I'd been looking for all along and bought the darn thing - for goodness sake.

I was aware of a Union Pacific main line near where I was but I didn't have an address for a suitable grade crossing and I'd lost my bearings, so went to probably the best spot in town - Control Point Tower 87....and wouldn't ya know it, some cop has nicked the best parking spot under the overpass. That meant I had to stay out in the sun. I was tempted to sit in the car with it running so I could enjoy air conditioned comfort, but I was tough enough to deal with this - man it was hot.

The drive from the hobby shops to this location meant either taking the quick way using the freeways, or zig zagging across town. Because I had to go through downtown, I chose the long way so I could see the sights - bad move - all I saw was "Road Closed" and "Detour" signs.
Sally the SATNAV had an absolute fit and threatened to leave a cold dinner in the oven for when I got home if I refused to obey her instructions. By this time I'd got pretty confident at zipping around town and she spent most of the day saying "Re-calculating".

I captured a brief glimpse of the Metro light rail, took a look at how it was built into the street and realised that this system is brilliant. It's not slow either.

Control Point Tower 87, or just Tower 87 is where all (most of) the main lines through town meet, cross, diverge, what ever you want to call it and it forms a triangle where the UP are greedy and have two yards - Englewood and Settegast, plus an intermodal yard. These two yards are almost at 90 degrees to each other.

There is also run-through traffic from the KCS and BNSF, and from here you can watch hump yard operations at Englewood as the hump line is close enough to Liberty Road to see the action, however in my case, there were trains up the yazoo waiting to pass through or enter the yard so the view was blocked. 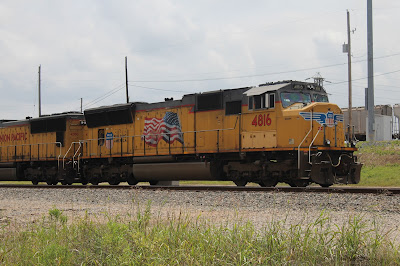 Trains up the yazoo - they were stacked up way out east, all waiting to come in, but other trains from Settegast were using the junction as a head shunt for switching. One of these trains had a huge consist on it and hardly any of the brake hoses were connected, so the engineer could only use the loco brake, which meant that when he wanted to stop the train, there was a bang along the couplers that was rather loud. Good stuff. So all the other trains had to wait for this beast to get out of the way.


"Holy smoke it's a Dash 7" - no, it's something else. What I thought was a Dash 7 had some missing bits - a fuel tank and most likely it's prime mover as well, but the body shell had everything else in the right place - even an exhaust stack. The UP call these a CCRCL - or a Remote Control Sled. The remote operating gear is fitted to this unmanned unpowered loco and designed in a way so that any other loco that's connected to it, acts like a remote loco and responds accordingly. It was once a classic machine, but now it's a rusted hulk doing remote switching. Sad story really. 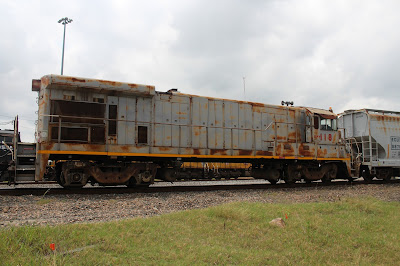 Because I was beside a yard, the train speeds were very slow - and when a BNSF oil can trundled by and turned into Settegast, I do remember yawning a few times - it was long.  Never mind, I made up for it by walking through some mud which required a lot of effort in the form of expletives to clean off my footwear. 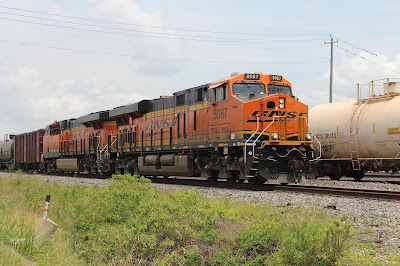 Lunch at Subway - this would usually require no further explanation on my part as it's a simple affair to purchase from here - oh no, not today. The East Houston Subway in the Eastpark Shopping Center is the pits. I was the only customer there - there were three staff members. Pretty good ratio for a quick getaway I thought.
One staff member looked at me and started to empty the bread oven. Another staff member looked at me and decided to pick up the phone and take a phone order - OK, that's fair. The third staff member took a look at me and decided to wipe down all the tables - to the point where she got a person - who was eating - to stand up and lift up their food tray, so she could wipe underneath it. The poor guy who was rudely interrupted looked at me and I looked at him with the same look of exasperation. I stood there for 5 minutes waiting to be served.  Bread oven boy finally got around to getting me what I wanted and phone girl happily took my money - she got a 1 penny tip. Table wipe girl suddenly burst into life when a local she knew turned up.

The other night in Shreveport I bore witness to the same attitude - at Dominos. It was getting late and I decided to go for a pick up from a 24 hr establishment. I got out of the car, walked towards the door, pressed the night bell to be let in and the girl there, who was saving the world by texting on her phone, looked up, saw me, and went back to texting. Needless to say, I muttered something incomprehensible and drove off hangry.

One can't help feel that this display is motivated by something other than pure laziness.  Good luck making America great again, Donald. It's going to be an uphill battle.

It was getting to about 2:30 and the heat was hot, the sun...no, we won't do that again, and I decided to check out a grade crossing that looked good. It was good, and there was a large open space and a tree I could park under. It was on the UP main line and was only 10 minutes from the hotel - at freeway speeds.
I sat there till about 3:45 and absolutely nothing happened. I was confident that I didn't need to set up the gear as there were plenty of grade crossings and I'd easily hear the noise of an approaching train  to give me a heads up. Nothing nothing nothing. The only thing of mildly any interest was a guy trying to give away puppies.
That's it, time to go. As soon as I dove off a UP intermodal came cruising through, totally un-announced - dang, it's a quiet zone - no train horns. But I did manage to zip around and point the camera through the window to get a photo. 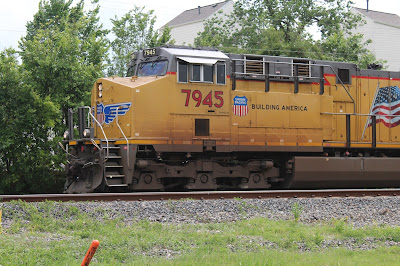 Home, shower and chill off in the aircon. Rain and thunderstorms expected tonight.

Tomorrow I head home, so everything will be packed up except the cameras. I'll probably do a wrap up when I get home as I still have all day tomorrow to look around. The flight doesn't leave until 10 pm, so me being me, I'll probably check in at around 5 pm and buy a book.