Today we relocated from Fredericksburg to Ashland Virginia, diverting back to the Spotsylvania VRE Station and Doswell.

We woke to the sight of a steady stream of light rain with no wind. It was expected, so can't really get all upset about it. Because the drive to Ashland was going to be relatively short, I amended the plan and took a diversion back to Spotsylvania and got a few more shots from there (of trains and Spotsylvanian Families....).
The shelter on the platform was wide enough to prevent us from getting wet and the last VRE train had departed about 1.5 hours ago, so the place was devoid of people.

As soon as I'd set the camera up, Lloyd calmly said "Look to your left", while at the same time I was cocking my head towards the right, wondering if the noise I could hear approaching was a train. We were both right - two CSX manifests were approaching at the same time from opposite directions. I concentrated on getting the shot of the train that was going to be closest to us, which also turned up first.

Mr Amtrak paid us 2 visits and then another CSX manifest went by with a whole lot of locos on it. The train was what the locals would call short, however with 65 freight cars, it was good enough for us. 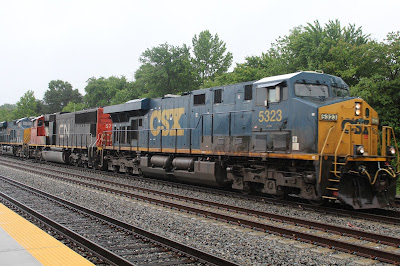 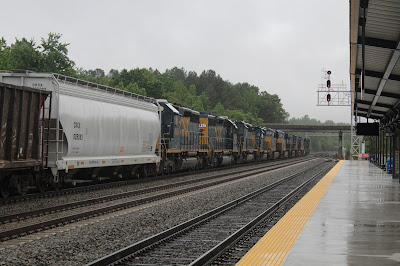 A whole lot of nothing started to happen so I called it quits and we headed south to Doswell. This place features in a lot of some really old VHS tapes I'd bought over the years and I'd always wanted to see the old depot (now used by CSX) and boarded up Tower here. Doswell is also home to a shortline called the Buckingham Branch and I was hoping to catch a glimpse of them in action. Their locos ended up being too far away and there's not a lot of public places you can sit and watch trains, so I jumped out, got a few photos and took off before I got sconed on the head by a pot plant that had been launched at me by a grumpy old woman for parking on her property - I know, what on earth am I on about ?
Let me explain - beside the tracks there's an antiques store and it's run by an old cabbage that vehemently hates railfans. She has NO PARKING signs all around the place and stories are abound about how she will shoo you away and cast spells on you if you park anywhere near her shop to do railfanning. It's unknown why she hates railfans so much, so I can only assume that at a significant time in her life she succumbed to our charming demeanor and exceptional good looks. Who knows? Funny thing is, as I was using her front lawn to turn around, she came outside, put something on the veranda floor and when she got up, sconed the back of her head. I shouldn't laugh, but I did. 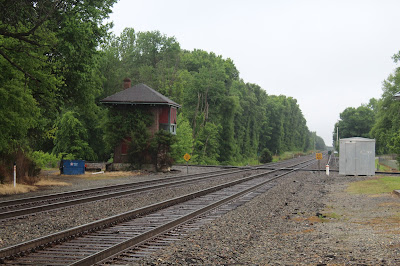 We continued on to Ashland and rain continued to fall. I instructed Sally to take us via Highway 1 instead of I95, so it was a more comfortable drive and we got to see a lot more trees that way...

We met up with a like minded railfan, who on Youtube is known as the FastFlyingVirginian and whom we shall refer to as Dave, who was also accompanied by another like minded individual whom we shall refer to as Patrick. Together they are a wealth of knowledge about the RF&P sub and the CSX and Amtrak trains that ply these rails and both had tales of adventures and encounters they'd had on their railfanning activities.

Dave had warned me that Mondays are slow for CSX and he wasn't wrong - today was the longest I'd sat and waited for a train to turn up. There wasn't much else to do and these are the only tracks for miles so it is what it is. The occasional Amtrak turned up intermixed with even fewer CSX freights, with the final encore being the Amtrak AutoTrain - I lie - another regional turned up just as we were about to cross the road to the Trackside Grill for dinner, and I was able to film that one as well...blocking traffic in the process....,ooooops, "Sorry, I'm from Australia !" 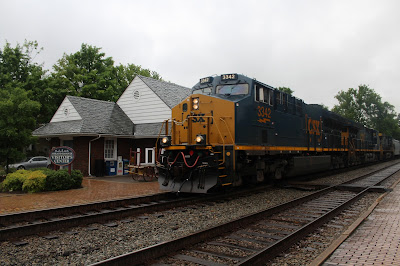 Ashland is blessed with having a double main line right through the middle of town, splitting Center Street in half. In some cases there isn't a lot of room between the edge of the road and the rails, so it is often referred to as 'street running'. Train speeds are pretty high at around 45 mph, and between two mileposts it's silent running - ie no horns ! 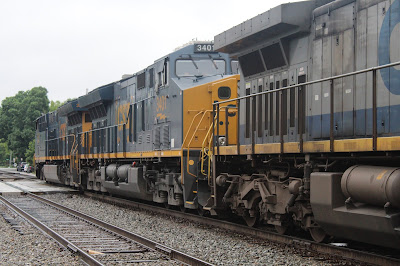 It has an Amtrak stop, but not a definitive station. The Information Centre is the old station building and also shares duties as the Amtrak Station. It's also where railfans hang out, and has a washroom that we can use. We sat there all afternoon. The rain finally stopped and the sky started to lighten. 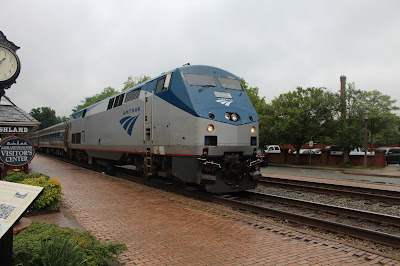 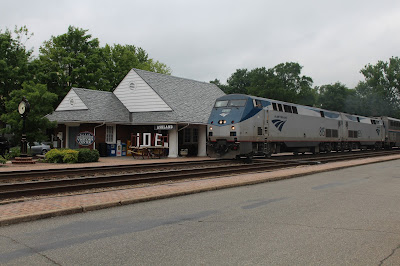 While Lloyd was occupied doing something else, a squirrel magically appeared. Amazing coincidence. "Omar's Squirrel" is a female that had been set upon by other squirrels and hurt in the process. She is now approaching humans as a source of food and although not tame, will get quite close. Took a photo. 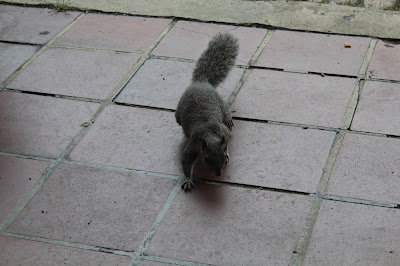 All four of us had a huge dinner at the Trackside Grill - obvious name you'd think, but its proximity to the horse track is how it got it's name. If you sit in a good seat, you can watch the trains (when there are some) roll by. There were two...