Today I bade farewell to Lloyd and continued west on my own to Shreveport Louisiana, with a couple of programmed stops along the way.

The first stop had to be the info centre at Vicksburg. The railroad bridge here has to be photographed, which I did, with a train on it too ! 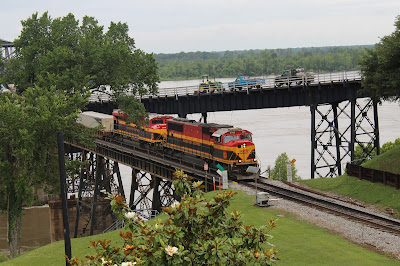 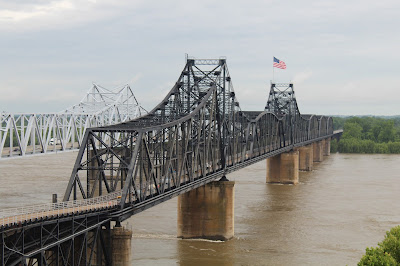 I also took a cruise down the hill to have a look at the yard, took a few photos and continued onwards across the Mississippi river into Louisiana, where one of the first road signs I saw was a warning to be aware of bears. That took me by surprise, and further research has shown that Louisiana has lots of black bears. Interstate 20 is on the northern edge of one of the preserves and next thing I see a bear fussing around in a ditch beside the highway. Amazing. Being on an Interstate doing 70 mph, there was no chance of stopping and getting a photo.

I had a go at following the tracks by driving on US80, but they were hidden from view and soon gave up that idea.
The next stop was at Tallulah - I stopped long enough to enter in a new address and get the heck out of there. Anyone who puts 115VAC mains operated lighting decorations in the middle of a river is just asking for trouble.

Upon reaching Monroe, I cruised along Millhaven Rd to have a look at the KCS Yard and got off a couple of quick photos, but nothing amazing. There was a bit of switching going on but it was too awkward to stop and film it, so continued on to Gibsland.
Gibsland is one of those blink and you'll miss it towns, but it has it's own short line railroad, and an old depot that is begging for a match. 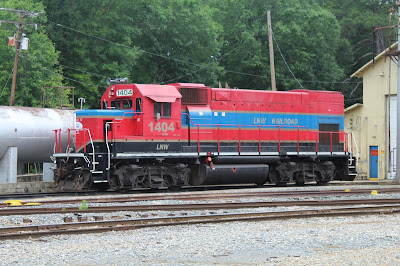 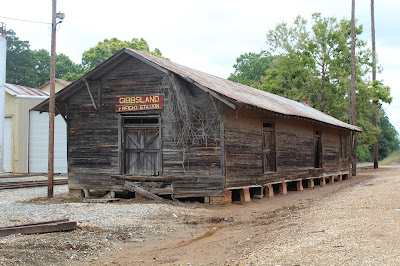 Another easy check in at Shreveport, followed by a rest and I was off exploring the sights. The last I knew, the street beside the hotel had a grade crossing, however this has now been closed off and is a dead end. But our friends at the Union Pacific still think it's necessary to blow the horn when they go across this unusable street - and guess what, my room is probably the closest room in the hotel to the grade crossing.

Looking forward to a disturbed sleep tonight - speaking of which, last night we had the most insane thunderstorm at Jackson. From about 9 pm to midnight, the bangs occurred about 20 seconds after the flashes, and the flashes happened about every 40 seconds. But from midnight onward, it was all on with the bangs occurring the same time as the flashes and the flashes happening every 12 seconds - it was intense. We had an excellent view from the 6th floor of the hotel. I'm unsure when it all ended as I finally fell asleep, with Lloyd having to smother his face with his pillow to block out the light show. It didn't help that the window didn't have a curtain that went all the way across.

My hotel at Shreveport had another surprise for me - they now have a car park building right beside the tracks which offers an excellent view from above. 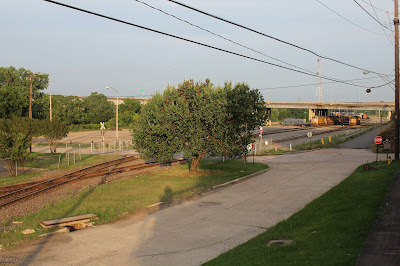 So I locked that one in for later.
I then found the large railroad bridge that goes across the Red River and managed to film a KCS manifest led by three Geeps - (I'd actually arrived as a UP intermodal was passing over). 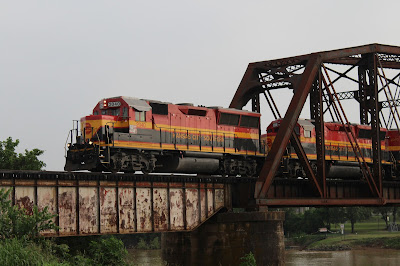 Upon coming back to the hotel, Sally had taken me beside the tracks and there parked on it was the KCS train sitting still. I remembered about a diamond further along in Bossier City so quickly re-programmed the SATNAV and turned up with plenty of time to get that train again as it was banging across the diamond. 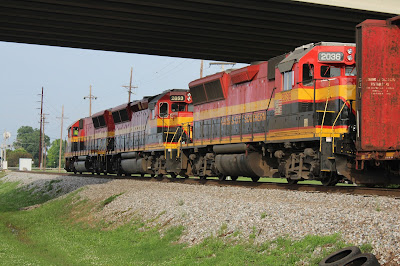 By now the sun was getting low and it was time to head back to the hotel carpark. I'd checked out other places but they looked dodgy as so didn't feel inclined to hang around.

The view from the carpark top floor was ideal, but the trains just didn't come until I was just about to pack it in. I'll try first thing tomorrow morning before I leave. Of course now that it's dark, four trains have already rumbled through - typical.

Tomorrow I return to Houston Texas, with the end now well in sight.